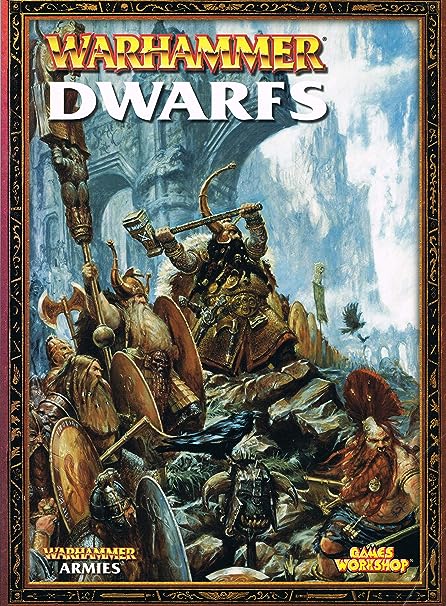 Because you like to piss people off by legally taking 25 war machines in 3, points matches. You also like Leadership of 9 across the board, a Toughness of 4 and Heavy Armour. Also if you have a thing for alcoholic midgets. This is an awesome ability and makes Dwarfs potentially one of the best armies in the game.

Yes, it is a table and therefore massively randomizes your success rate, however there is no bad result and if you look at it statistically, you can easily predict what it will be useful for.

For example, you can completely rely on your characters Hating enemy characters, this is immense. Look at Choppas and now see that on your better, more resolute Dwarfs.

Relentless: No Leadership test for marching close to an enemy. Good, even though Leadership isn't too much of a problem. Now you have a reason to use your shield dwarfs.

Having a third of all damage blocked in combat is amazing. Ask Daemons. You rarely ever charge first as dwarfs, so you should see this as a bonus. Dwarf Crafted: You don't take the -1 to hit penalty when doing a Stand and Shoot reaction. Every Dwarf ranged weapon has this, bar the war machines. Another reason to field the dwarf gunline.

In most cases, it's easy to emulate their abilities from scratch and save quite a few points. That's not to say they're worthless; named characters do have some unique abilities and combos, but make sure you're getting your points worth. Note: While named characters are judged against their generic counterparts, generic characters are examined based on their role in your army.

Buy a battleline set or two to start, you can get a couple for the same price as a battalion from the official site if you know where to look. Do all of the warriors as the same type, 40 warriors in one unit is far more effective than two units of The shooty dwarfs should be assembled depending on who you usually face. Thunderers and quarrelers should generally have shields. The 4 cannons are really good both ways. Next, buy a dwarf lord with shieldbearers. Gyrocopters will never go amiss, but make sure that you can afford it if you made the cannon into an organ gun.

Keep buying more dwarfs, a Runelord is no longer a good choice due to barely being better than the Runesmith for 60 pts more, but a BSB is still ever-useful. To make models look really good is easy, any detail you don't like just cover it with green stuff beard, and any model will always look better with an extra big bushy beard on top except for those otherwise stated. Old Longbeard models are a good reference for these conversions.

Also, braids on either side of the beard add a Celtic feel to the models which is reminiscent of the previous incarnation of Dwarf fluff when they were a little less viking-y.

More beard seems to go a long way, especially because the plastic sculpts don't really compare to any of the newer models coming out. Also bigger round shields do absolute wonders for Dwarf models, using thumbtacks or converted marauder shields make your models look amazing.

The nature of the Dwarf units is more restrictive than most other armies, since you basically have only two types of units: infantry and war machines. You don't have cavalry, war beasts, monstrous units, monsters, swarms, you don't even have cheap chaff or skirmishers!

This, together with M3 across the board Gyrocopters not counting means that Dwarf players historically tend to play rather stationary. But make no mistake, it might seem easier to play like this, but it means that mistakes during the deployment phase are so much worse, since you have little chance to remedy them. With so little variation in your units, the differences often lie in the detail:. 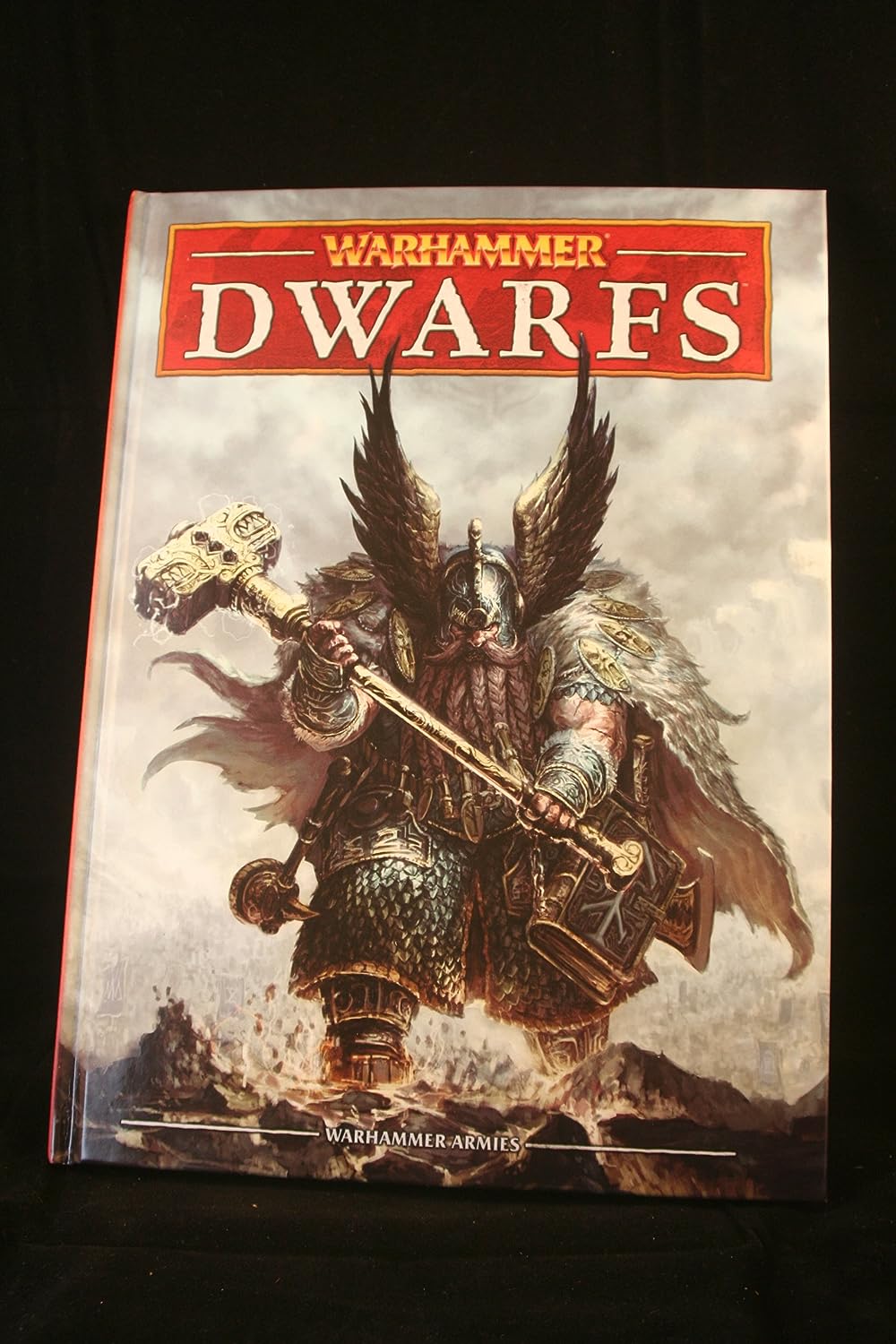 Dwarf Warriors vs. Longbeards: With the exception of a pure gunline, you're going to field at least one of these two units.

Field something like 30 in at least 5 ranks, they can take a lot of punches. Dwarfs in general work very well with Great Weapons, as they anyway have a low initiative. They neither need a character to support nor the BSB-bubble but are still capable of holding their ground against most enemies.

Be it Warriors or Longbeards, always have a full command. Quarrelers vs. Thunderers: Well, both weapons have merits. The crossbow has the longer range, the handgun is armour piercing. There are more occasions where the handgun takes the cake, but the crossbow just has these extra 6", so if your opponent stays out of the standard 24" distance or you have the first turn and your opponent was clever enough to deploy his troops half an inch behind the lineyou would lose one round of shooting to move your Thunderers into threat range.

Additionally, Quarrelers can be equipped with great weapons as well as shields, Thunderers only have access to shields. The command units basically only give bonusses in close combat and are therefore not really necessary as a the champion doesn't have a better BS but an additional attack, b both weapons are move-or-fire so the musician's main benefit for shooting units - the swift reform - has no use here and c they cannot take magic standards and generally these units are not your dedicated close combat fighters anyway.

Save the 30 points and get two more troops instead, maybe unless you're playing a gunline and your shooting units also have to fill the role as close combat units, in that case definitely get a full command unit!

Superiority breaks down like this, based on the distance to the enemy:. Hammerers vs. Ironbreakers: Your two main elite fighting units. With the changes in the last edition, Hammerers became just really, really good. They tick all the right boxes.

Their only weakness, if any, is a relative low armour save, especially in close combat buying them a shield only helps against shooting. But they dish out pain like little else and are stubborn, so they work just as well in two small units. Ironbreakers on the other hand are very resilient and with S5 on the charge and maybe a Runesmith in the unit are not to be dismissed offensively either.

I'd say it depends a little on what you have in your core and what you battleplan is. You have a large block of Warriors with shields? Take a unit of Hammerers either side. You have Longbeards with great weapons? Have them around a unit of Ironbreakers. Miners vs. Rangers: Your two choices for units with deployment special rules, a better form of Ambushers for the Miners and Scouts for the Rangers.

To be honest, neither is too great. Dwarfs are slow, very slow, so they just don't make for good ambushers. That means you can charge on turn 3 at the earliest, and only something which is still pretty close to the bord edge.

And your opponent has a turn to react to your arrival. Minimum unit size for Miners is 10, at 10pts a model that's the cost of a Gyrocopter with vanguard. But since they are a special unit and literally every other choice in that category is superior, there will probably only be one relatively small unit.

Yes, it can work in the right situation, but for me it is not a choice for a general army. A vanguard Gyrocopter is more versatile. Rangers have a similar problem. Scout is a nifty rule, and a decent unit with crossbows cleverly positioned can be a real threat for your opponent. Rangers would benefit from being Skirmishers, which would allow them more flexibility and would go nicely with their throwing axes which are just great, never forget you have them! Similar to Miners, Rangers are clearly the weakest choice in the rare slot, it would help if they were special troops.

Both Miners and Rangers have the problem that you will have a hard time reinforcing their position with your slow army, which often likes to stay back and give their war machines more time to shoot the enemy to pieces anyway. They can be effective in the right situation, but most of the time that can also be done by Gyrocopters. And both units suffered a major blow when this one rune was scrapped which would have allowed a character to join either unit and gain their special deployment rule ideally combined with that other scrapped rune that forced an enemy unit to charge All in all Rangers can be a little more valuable, since you can get five at 14pts a piece and they can be deployed at a strategic position to deny it your enemy Scouts and Vanguard in 12", which can be crucial.

Cannon vs. Grudge Thrower vs.

Bolt Thrower vs. Organ Gun vs. Flame Cannon: Phew, that's not easy, they're all great! Usually you shouldn't leave your hold without an Organ Gun, it's just too good.

The good old Cannon strikes fear in your opponent's heart like little else, and there is always a target worth a shot. When in doubt or you don't know which army you will be facing, you don't make a mistake with fielding these two. Gyrocopters vs. Gyrobombers: For only 80pts, there is almost always room in your army for at least one Gyrocopter.

They make for good war machine hunters or harassing enemy units with their steam cannon, especially some pesky waywatchers or similar hiding behind cover.

See discussion page. Great if you are going up against those two armies Otherwise you paid 50pts for making your attacks magic. Silver Horn of Vengeance: Even more grudge holding. For 45 points it gives for 1 turn, all dwarfs within 6" devastating charge good for when the enemy reaches a gunlineand once used, causes fear in all elves.

This can really bring the hurt with your Longbeards and Elite units, everyone Striking with two attacks and at S5 or S7 with great weapons will crush everyone in its path, and it also has good synergy with Slayers armed with two hand weapons since if Slayers die they still get to make one attack and in this case they normally make 3 attacks for Troll Slayers, 4 for Giant Slayers allowing you to throw a bucket of dice in combat.